A glance through a genius' mind.

Cosas Imposibles (translated: Impossible Things) is a music video from the album Siempre Es Hoy released in 2002 by famous Argentinian songwriter and musician Gustavo Cerati. We always dream about doing  things that are literally impossible for us, a very poetic and romantic thought that only exists in our minds: this is the core inspiration for the song and music video.

In this video, we see Gustavo singing to some toy babies, giving them life and interacting with each other. The babies seem to mimic what Gustavo is doing and quickly start doing what they want, like dancing around, play guitar and party like no one’s watching. In a very basic form of found object animation, this goofy and unique video is always a good option if you’re looking for some inspiration as a beginner, as the objects animated here are very common and a great example that you don’t need a huge production to have a new and fresh idea. 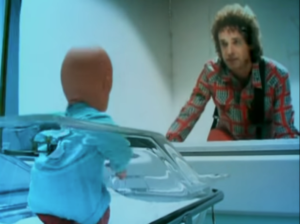 Gustavo Cerati and the baby

Gustavo Cerati was a well known artist from the 80’s in Latin American pop culture, and he’s considered one of the most influential musicians in Spanish-language rock music along with his band Soda Stereo.

Corpse Bride – Behind the Scenes “Page to Puppet” Video