But Milk Is Important by Anna Mantzaris and Eirik Grønmo Bjørnsen 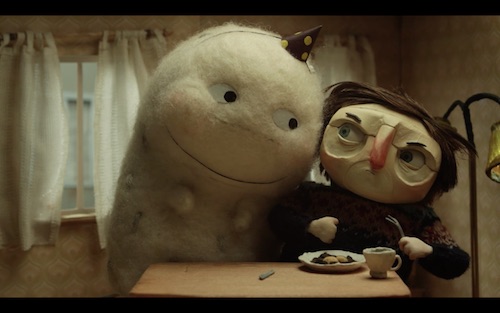 But Milk Is Important is truly a modern day classic. This film directed by Anna Mantzaris and Eirik Grønmo Bjørnson is so filled with magic of the moment spots throughout the film that it truly is a lesson in the “film beat”. The performance of the animation is hinged on the anticipation of the movement that will literally have the audience absorbed into the visuals and story. The production is a masters work of cardboard, wood, clay, felt, and fabric while truly pulling the viewer deeper and deeper into the story with both the sound design and the color. With each moment we want more until the climax were we are left with questions.

The film takes us into the life of a man who is afraid of people. He hides from everyone and everything by locking himself into his apartment and only coming out to get the daily mail. This results in him coming face to face with a large puffy monster who pushes him into moments of forced human interaction with his neighbors. In an attempt to escape this monster he catches a train out of town to only run into this monster on the train. He soon realizes he cannot escape and in a moment out chance he faces his fears resulting in the monster leaving and restoring the mans faith and patience with himself and the world. Such a stunning film with every frame. This is highly suggested to be one of the modern day stop motion renaissance classics. Anna Mantzaris has gone on to make more such modern classic films such ENOUGH and GOOD INTENTIONS.

Checkout the film below:

But Milk Is Important from Eirik gb on Vimeo.

The Fish, by PES

Are you sure want to cancel subscription?